Less than 2 miles from campus, the Harris Grove Condominiums parking appears empty of cars and residents. Throughout Oxford and Lafayette County, many housing complexes face the same vacancy.

Classes across campus have taken on the task of studying the issues of affordable housing and gentrification in the county. One class is working to raise awareness and tell stories of people affected by the issues.

During the Facebook page’s first week, the students participated in a standing art exhibit where they stood in the halls of Farley Hall holding up the community profiles they created. The exhibit was the initial step in raising awareness. 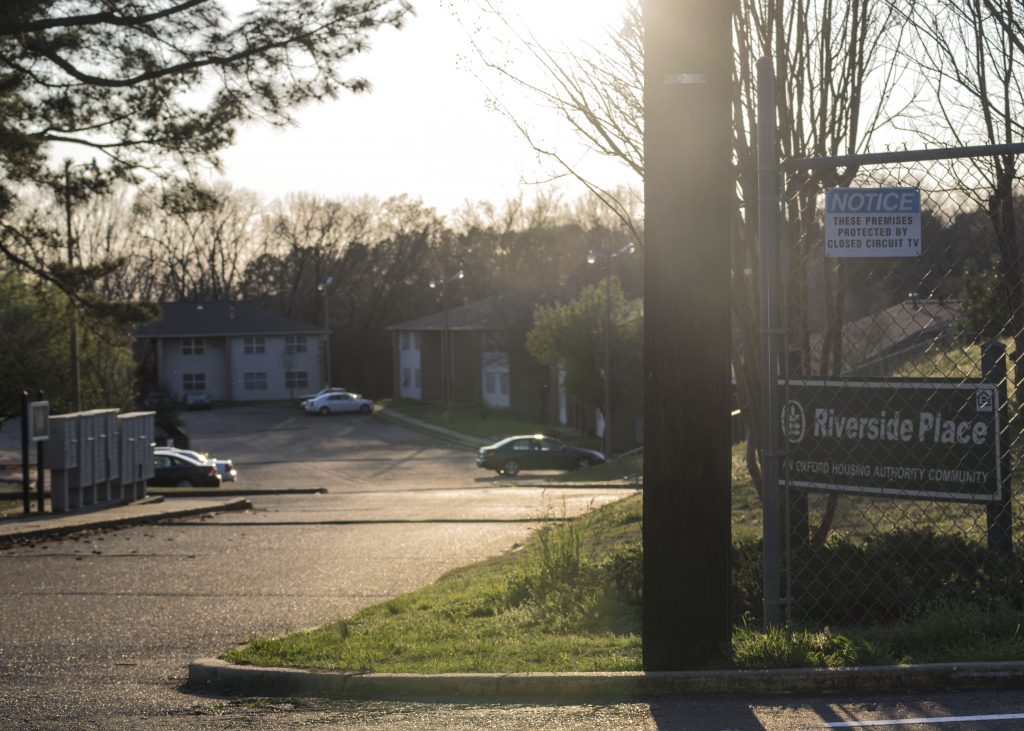 “Before Professor Sadler’s class I wasn’t aware of the housing crisis in Oxford,” said Laura McCoy, a junior integrated marketing communications major. “Our goal as a class has been to create awareness of those affected.”

McCoy managed the Facebook page with a few classmates to post information they collected through surveys and class lectures. She said the research and social media aspect of the class showed her just how many Oxonians are affected by insecure housing.

“Being a student sometimes I feel like we are in our own bubble,” she said. “This class and topic has made me realize how others are affected within the Oxford-Lafayette community.”

The class took random cluster samples of housing blocks around the county earlier this semester and, once a week, in groups of two, made walks to administer the survey.

The survey asks for basic information on the head of the household, such as race, marital status and income. The housing characteristics section asks residents to rate the overall quality of their homes by assessing water, power, electricity and rent quality.

The survey also asks about residents’ struggles related to their housing, such as difficulty paying rent. The “neighborhood characteristics” portion asks about the neighborhood’s safety and location relative to everyday essentials.

The class’ goal is to alert Oxford officials that finding quality, affordable housing in town is difficult by showing in-depth data on the available housing. Riverside Housing complex was one of the few remaining public housing options in Oxford, and it shut down in February.

Thomas said he hopes that by the end of the semester, each pair will have surveyed 60-70 individuals.

Jenna Bailey, a senior enrolled in Thomas’ class, walked door to door through the Harris Grove Condominiums with sophomore finance major JT Mullins, looking for residents to survey. They found a concentration of empty homes.

“I don’t think our groups are having a ton of luck,” Mullins said.

Mullins said he decided to take the honors class because of its interesting yet specific topic.

Bailey chose Thomas as her thesis advisor and said she knows how passionate Thomas is about the topic of affordable housing in Oxford, so she wanted to learn more about the issue.

Bailey and Mullins slid “Request for Participation” fliers under the doors of empty condos, unsure if the residents were simply not home or if the condos were empty.

Bailey said one resident told her the neighboring condo was usually empty because the property is rented out on a day-to-day basis.

Bailey said although their results will not be able to reverse the closing of Riverside, the findings could possibly prevent similar future incidents.

“The goal is to give them this stuff and be like ‘This is an issue, not something to brush under the table,’” Bailey said. “Let’s try to figure it out.”

“You can live farther away in urban areas and get where you’re trying to go,” she said. “Whereas if you don’t have a car, there’s not a lot of transportation means if you’re outside in the outer-county limits.”

At the forum “Ideas On Tap: What Happened to Affordable Housing?,” sponsored by the Mississippi Humanities Council, Ward III Alderman Janice Antonow defended the city’s decision to relocate Riverside residents.

Antonow said the board wants to give residents vouchers that will go toward rent in order to provide the opportunity to live in better conditions than those previously available at Riverside.

The students, however, are unsure that such housing really is available, due to the high rent caused by competition for amenity-filled student housing.

Bailey said the group plans to take its results to the city and future developers in hope of construction of more affordable housing, especially for those on welfare.

“No matter what, I think housing’s always an issue, so the more information you have on it, the better,” Bailey said.

Thomas’ class hopes its research will enable every Oxford resident, regardless of financial status, to have safe, secure, comfortable housing.