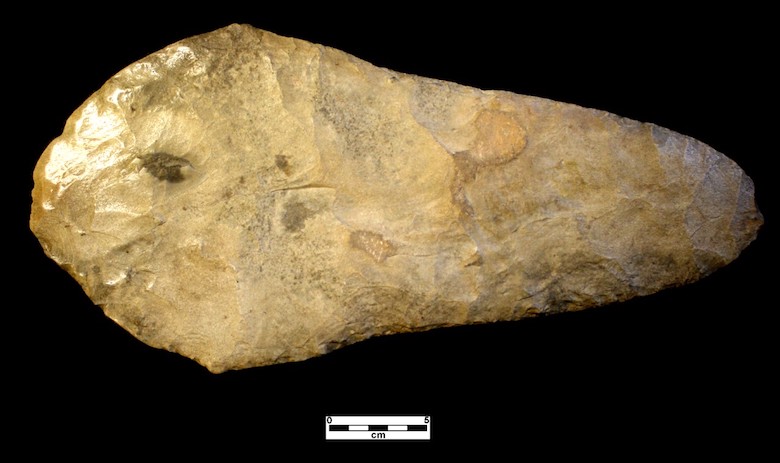 Hoe found in Coahoma County, Mississippi that is made from stone that came from southern Illinois. The hoe was probably used in agricultural fields of maize between AD 1200-1400. Photo by Tony Boudreaux

Two professors in the Department of Sociology and Anthropology, Tony Boudreaux and Maureen Meyers, have received a grant for $500,000 from the National Park Service to maintain and preserve the University of Mississippi Archaeological Collection, a noted assemblage of as many as 500,000 Native American artifacts stored on the Oxford campus. The grants program, Save America’s Treasures, helps preserve nationally significant historic properties and collections. This project was made possible in part by the Institute of Museum and Library Services, which will administer the grant. It will be matched by a $500,000 grant from UM.

The majority of the archaeological collection consists of artifacts—some dating from 12,000 years ago—retrieved from sites within Mississippi, part of the historical territory of the Choctaw and Chickasaw Nations.

“These objects are how we learn about the culture of these people and connect to it,” said Boudreaux, associate professor of anthropology and director of UM’s Center for Archaeological Research.

Boudreaux and Meyers will oversee the preservation project, which will begin this semester, and will include cataloging the entire collection, transferring it to boxes made of archival-quality materials, and eventually, transporting the collection to a secure, climate-controlled space on the UM campus. Their team will include both graduate and undergraduate students.

“Thanks to the hard work, expertise and vision of Dr. Meyers and Dr. Boudreaux, we now have the opportunity to truly transform our archaeological collections and save these treasures,” said Jeffrey T. Jackson, chair of sociology and anthropology. “This grant from the National Park Service will allow us all to better appreciate and understand our collective past.”

The UM Archaeological Collection was begun in 1917 by UM Professor Calvin Brown who worked with residents of Mississippi to donate their privately-owned impressive Native American collections to the university for posterity. He was not trained as an archaeologist, but at the request of the Mississippi Geological Survey, he both salvaged the artifacts and documented the sites where they were found through photographs. The collection was acquired by the Department of Anthropology and Geology in 1949 and grew to include items from across the Americas. Since the 1970s, the collection primarily has grown through faculty and student research projects and archaeological field schools conducted across Mississippi.

“The College of Liberal Arts is strongly committed to supporting the work of our faculty, and in this case, caring for an important and priceless collection of Native American artifacts,” said Lee M. Cohen, dean of the College of Liberal Arts. “I am delighted that we will have a campus space specifically designed for this work and allowing for expansion. Professor Boudreaux and Professor Meyers are not only leaders in their field but are also doing a great public service for our state.”

This is the second National Parks Service award that Boudreaux has received this year. Last summer, he was the recipient of a grant from the National Park Service American Battlefield Protection Program. That grant supports his research at the Grand Village of the Natchez Indians, who fought the French from 1729 to 1731. This project will use geophysical instruments and soil coring to determine if intact features from a 1730 siege are still present.

“The university has been the steward of this archaeological collection for over a century,” said Meyers, associate professor of anthropology. “It is the ethical responsibility of archaeologists to ensure that collections they oversee are well cared for. I see this project as my service to the university.”