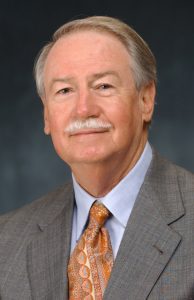 Grisham joined the Ole Miss faculty in 1961. Four years later, he enrolled in doctoral studies in sociology and history at the University of North Carolina. While taking his coursework at UNC, Grisham was hired to teach full time at North Carolina State University, where he was identified as a master teacher.

Armed with his Ph.D., Grisham returned to UM in 1968, where he taught more than 20,000 students in the Department of Sociology and the Sally McDonnell Barksdale Honors College before retiring in 2016. He was selected as the university’s Outstanding Teacher and presented him with the Frist Award for service to students.

The American Sociological Association named Grisham one of the top 25 outstanding sociology professors in higher education. He was president of the Ole Miss Faculty Senate for two terms. In addition, faculty from the eight Mississippi universities elected him as State Faculty Senate president for two terms. He has authored six books.

Grisham served as scholar-in-residence at the Southern Growth Policies Board and as an associate at the Kettering Foundation, Annie E. Casey Foundation, Winthrop Rockefeller Institute and the Brushy Fork Institute at Berea College.

Grisham established the McLean Institute for Community Development at UM in 1984. He has assisted communities in 33 states and two Canadian provinces, and his work has been taken to both Siberia and South Africa.

He has been married to Sandy Hopper Grisham for 37 years. They have four children, nine grandchildren and three great-grandchildren.